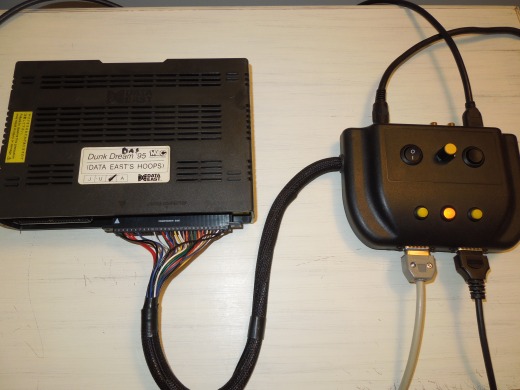 Note 1: This game was played by using an HDMI Supergun.  It was connected to a 32-inch HD-tv.

Note 2: I apologize for the quality of the pictures.  The game looks amazing when played through this Supergun, but I have no way to pause the game, so a lot of the pictures are blurred due to being taken during the action of the game.

Note 3: If you like basketball games, check out my reviews of Nekketsu Street Basket, Dunk Stars, and Dunk Dream. 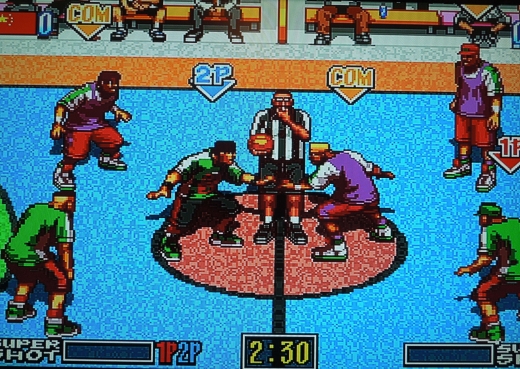 The sequel to the Neo Geo’s Dunk Dream

Brief History: Dunk Dream ’95 (also known as Data East’s Hoops) was released in 1995 as one of only four games for Data East’s MLC Arcade System.  It is the sequel to Dunk Dream for the Neo Geo, and it improved upon that game in many ways.  Additionally, a Version ’96 of Dunk Dream ’95 was released the following year in Europe, although what, beyond the starting screen is different, I do not know. 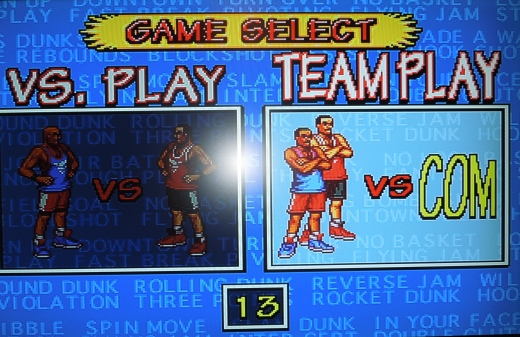 Modes: In 1P mode or 2P Team Mode, you play an international basketball tournament to see if you can take down all competition. During the tournament, you’ll play 12 teams, including a mirror match against your own team.  Difficulty gradually increases with each team that you face.  Additionally, there is a VS. Mode.  Depending on the setup of your arcade cabinet or Supergun, between two and four players can face off.

Gameplay: Like it’s predecessor Dunk Dream, Dunk Dream ’95 is 3-on-3 basketball.  There is only one half of basketball instead of two, and you can adjust the length in the Test menu between two and four minutes.  The clock moves rather quickly, so games are fast and furious.  The game begins with a tipoff, where you furiously beat button A (if you’re using a Neo Geo stick for a Supergun – this would be the ‘first’ button on an arcade cabinet, I imagine) to tip the ball to one of your two teammates.  From there, you’ll try to shoot, slam, block, and steal your way to victory. 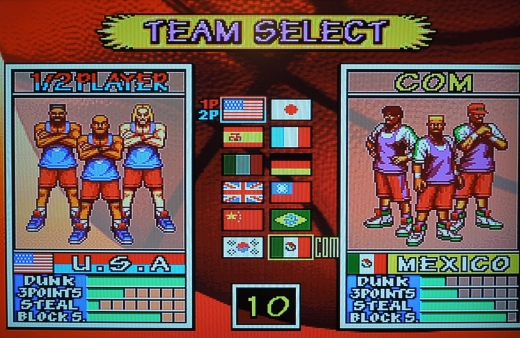 Teams: Each of the 12 teams has their own strengths and weaknesses among four categories: Dunk, 3 Points, Steal, and Block Shots.  If a team is high in a certain area, they are more likely to achieve that particularly feat during a game.

Controls: On offense, A shoots and B passes.  Hitting A + B when you’re on your end of the court and have another player under the basketball executes an Alleyoop (you’ll need to hit A again to catch and dunk the ball when it is thrown up).  On defense, A jumps to block a shot when you’re opponent shoots (if you time it right, you’ll snatch the ball out of the air – you can also stand near the goal and pick off shots – there is no ‘goaltending’ or any other foul).  Button B steals by snatching at the ball or throwing an elbow at an opponent when he is near.  Pressing Toward, Toward quickly executes a spin/juke to get around a defender – it works amazingly if you can time it for when an opponent is going for a steal. 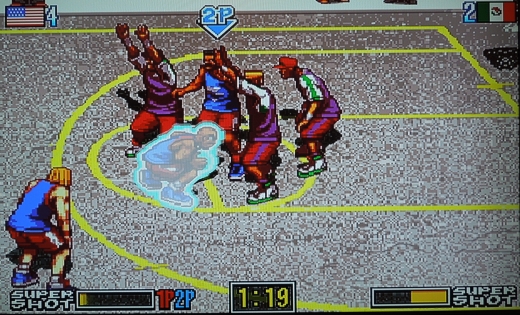 Super Dunks can only be stopped by Super Defense!

Power Meter: As you make shots, your power meter will fill.  Once you’ve hit a couple of shots, you can execute a ‘Super Dunk’ by quickly hitting A twice if you’re inside the 3-point line.  If you’ve made three shots, your power meter will hit another level for a ‘Super Three.’  If you quickly hit A twice when outside the 3-point line, yet on your half of the court, you’ll execute an explosive three-pointer.  Finally, on defense, if your meter is full from your offensive play, you can elect ‘Super Defense.’  This only works on Super Dunks though – you can’t stop Super Threes.  To execute Super Defense, wait until your opponent has begun their action for a Super Dunk and quickly hit A twice if you’re in between your opponent and the basket.  Your player will leap up and reject (and steal) the ball!  It’s all very easy and awesome-looking! 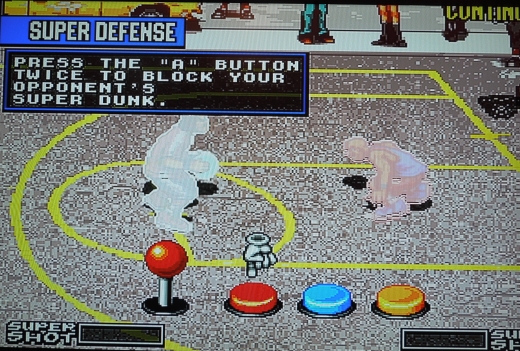 The controls are simple, but a (skippable) helpful tutorial plays before the game starts.

Improvements: Dunk Dream ’95 greatly improves things over the already excellent Dunk Dream for the Neo Geo.  Here is a list of the things I noticed:

(1) 2P Co-op!!!  I thought this was the case, but I couldn’t confirm this before I received this game.  In the original game, you could only play VS, but now, you and a friend can play through the tournament together. 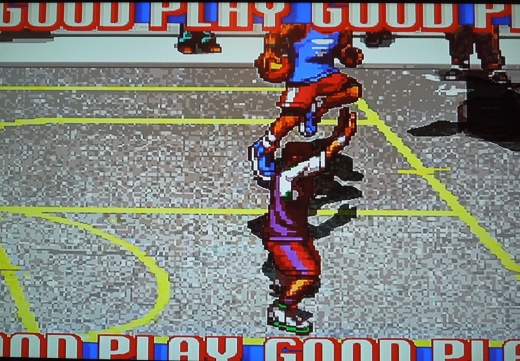 (2) Replays – If you make a particularly good shot, the game will give a quick replay (typically only happens once per game).

(3) The super meter has separate levels for dunks and 3-pointers (as mentioned, it takes longer to fill the meter for 3s).  In the original Dunk Dream, while making two-pointers didn’t fill the meter as much as three-pointers, once your meter was full, you could execute either a Super Dunk or a Super Three.  Now, you’ll have to give great consideration to using your Super Dunk as soon as your meter is full or waiting to try and fill it for the Super Three.  Basically, there’s more strategy involved with the power meter now, particularly with the addition of the Super Defense maneuver.

(4) Zoom ins – Dunk Dream ’95 sometimes zooms in on the action in dramatic fashion, the way the original never did.

(5) The Spin Move – being able to elude defenders without passing the ball is a definite improvement.  This move wasn’t present in the original, but it now adds another strategic layer to a simple arcade basketball game. 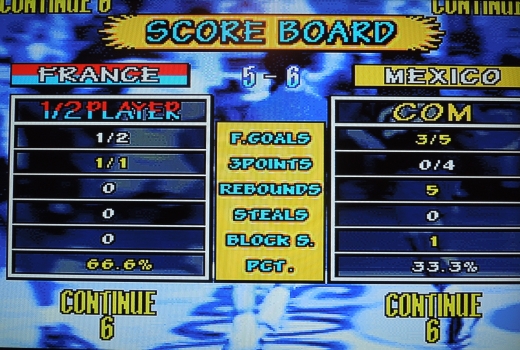 Stats are provided at the end of each game.

The Southern Gentleman’s Opinion and Letter Grade: A+ Dunk Dream ’95 is a spectacular game.  The control is perfect, for starters.  While the game is generally an updated version of the excellent Neo Geo Dunk Dream, the improvements are all just that – improvements, not regressions.  It’s a similar game as well to Dunk Stars (see my review), which I also love, although it’s better than that game if for only two reasons – the 2P co-op and the fact that the alleyoop feature works better.  The Test menu allows you to adjust the difficulty from 1-8, adjust the game time, and even play 4-player if you’re setup allows (mine doesn’t, but it’s still a great 2P affair).  The game cartridge saves your settings as well, so you don’t need to readjust every time you turn on the game.  Another slam dunk! 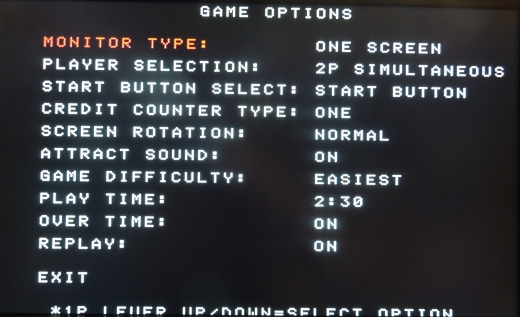 Plenty of helpful options exist for varying your play experience.