Note:  This game/jamma arcade board was played using an HDMI Supergun connected to a 40-inch HD-tv.

Original Release: The Legend of Makai was released for arcades in 1988 by Jaleco.

Story:  (from the arcade manual) The Princess has been kidnapped by the evil undead Wizard of the Makai Wastelands.  The people have lost all hope because it is said that the wizard cannot be killed.  You must prove them wrong as you travel through the forests, hills, and caves of Makai seeking the letters of the Spell that will end the Wizard’s evil forever and free the Princess of Makai.

Options/DIP switches: You can change the difficulty from four levels, set the game to ‘Free Play,’ which gives you unlimited credits, change the number of lives per credit from two to five, and even turn on ‘Immortal’ mode where nothing can hit you!  There is a slow clock that runs in each stage (typically three or four minutes), but nothing in the DIP switch settings allows you to lengthen or stop the clock.  However, in Immortal mode, not even the ‘Evil Eye’ that comes to kill you when the timer runs out can touch you!  It’s kind of like a game genie cheat code!

Collect gold to buy weapon upgrades and clues in Shops.

Gameplay: In The Legend of Makai, you control a warrior who must battle through multiple stages, defeating enemies and end-of-stage bosses, collecting keys, buying weapon and armor upgrades, and searching for clues that will enable you to learn the ‘Spell’ that will enable you to kill the wizard that is terrorizing the land.  The game is not strictly linear with you battling from one side of the screen to to the other, as you have to frequently explore different areas in each level to uncover a key or trigger a conversation with an NPC that will allow you to finish a level.

Control: Button I swings your sword/fires your projectile (if you’ve bought one).  Sometimes, however, swinging your sword is not always necessary – by simply having your sword extended (which it automatically is), many enemies will impale themselves upon it when you approach them!  Button II  jumps.  You can jump on the heads of most enemies to kill them, and from there jump again (kind of a ‘double jump’ feature).  Down crouches.  When you crouch in front a door, you’ll enter it.

Gold: As you explore each level, you’ll collect varying amounts of gold (in the form of jewels) that can be used in Shops.  Gold is pre-placed in each level, and you do not obtain any from slain enemies.  It’s easy enough to accumulate, and you’ll definitely want to, as the best items can be quite pricey.

Stopping in shops for items is crucial to beating the game.

Items: In shops, you can purchase healing potions, strength potions (temporary invincibility), and jump potions (temporary higher jumps).  You can also purchase better swords, shields, boots, projectile weapons, and the feather that allows you to use a helpful ‘floaty’ jump.  Finally, you can purchase ‘clues’ that tell you where to find important NPCs or keys.  Occasionally, an item you purchase turns out to be ‘fake,’ and you don’t get your money back for it either – this stinks.  Buyer beware.

Keys: Green, Blue, and Red keys can be found scattered throughout each stage – they’re usually in out-of-the-way places, like in treetops or hidden in caves.  You don’t always need to collect each colored key to access the door to a stage’s boss, but you occasionally cannot advance until you find a particular one.  Other times, you’ll find treasure colored treasure chests that can only be opened with the appropriate key – these usually contain a healing potion or gold.

Checkpoints:  Your warrior can only take three hits before dying, at which point he goes back to a nearby checkpoint – most of the time.  In later stages, you’ll need to be better at staying alive, as the game may put you back at the beginning of the stage if you die!

Hidden Doors/Talking to NPCs multiple times: The first few stages, despite having to do a bit of exploration, are fairly straightforward and easy to figure out.  However, beginning with the fourth stage, the difficulty ratchets up as you try to decipher the sometimes-cryptic messages to uncover hidden doors leading to crucial NPCs or keys.

Each stage ends with a boss – fortunately, if you die, you’ll respawn at the same spot, and the boss’ energy will still remain depleted.

Two Endings: As you explore each stage, searching for the key to the boss door, you’ll uncover the hidden letters that enable you to get the ‘good ending’ if you beat the game.  When you get to the final boss, you’ll be able to input this six-letter password (I won’t spoil it for you by providing it).  If you don’t know it because you haven’t found each letter, you can still fight the boss, but you’ll get the ‘bad’ ending.

Difficulty: Even on the lowest difficulty (‘Standard’) Legend of Makai is quite challenging.  You won’t have much trouble in the first half of the game, but after that, you’ll run in circles for awhile trying to figure out exactly where to go.  However, with persistence, you can defeat each stage without the need of consulting a walkthrough guide – we’re not talking Castlevania II-style impossibility here, as the clues are sometimes a bit vague, but not completely misleading.  In the later stages, the difficulty is more often in staying alive long enough to uncover the path to beating the stage.  It’s not a bad idea to use ‘Immortal’ mode to beat the game the first time.  This game is designed for multiple playthroughs in order to memorize where to go.  Once you do that, it becomes far more enjoyable. 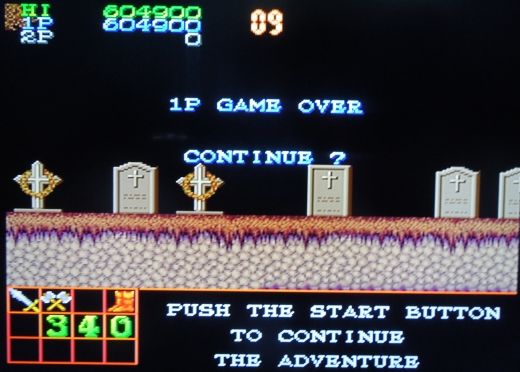 You’ll be seeing this screen a lot, so it’s best to set the board to ‘Free Play.’

The Southern Gentleman’s Opinion and Letter Grade: B The Legend of Makai is a decent action-RPG.  I first looked into it because I wanted something similar to Cadash, another action-RPG that I love.  This game is not as good as Cadash, but it’s also older, so that may not really be fair.  It’s got some good things going for it, and the challenge, while frustrating at times, is not impossible, and makes for a different experience than most other arcade games out there.  A small but important feature, to me at least, is the fact that the slow clock allows you to take short breaks from time to time if you’re in the middle of a playthrough.  The music and graphics are quite basic, but Legend of Makai does have an understated charm to it that fans of game’s like Zelda II, Magician Lord, or Cadash may find appealing.