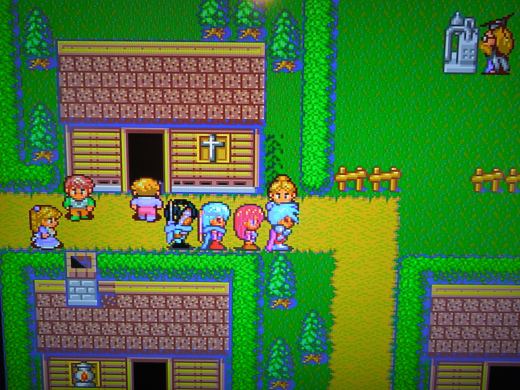 Note 1:  This game is an English-translated reproduction disc.  As far as I’ve read elsewhere, the game was ‘machine translated,’ and I had no problem playing through the game, as the translation, while often structurally awkward, was just fine and understandable.  Thanks to whoever did this!

Note 2: This game was played on a PC Engine Duo that has been modded to output in component video.  It was connected to a 40-inch HD-tv.

Note 3: This will be a short review!

Overview: Startling Odyssey II is an overhead, turn-based RPG that can be completed in approximately 25-30 hours (that was my experience).  You control a party of four (once you meet the other characters) and spend the majority of the game traveling in an overworld from town to town, buying weapons, fighting enemies, and exploring landscapes.

The game follows a Town-Tower-Boss pattern again and again.

Story: In the game, you play the role of Rob Salford, the ‘Blue god of Death,’ and are tasked with fulfilling your destiny by stopping the evil Kirubeito, who is creating/modifying Dragons to destroy the world.  The ultimate Dragon is Babylon, whom you are trying to prevent from reviving.  You and your party have to collect 8 amulets that will help in accomplishing these tasks.

Gameplay: You’ll spend the majority of the game walking (later sailing and flying) across landscapes, through caves, and over mountains, uncovering new information in each new town you come across.  You’ll level up your characters through frequent random enemy encounters, and you’ll buy armor and weaponry in each town or find them in chests.  Generally, in each area of the game, there are towers that need to be explored, a boss to beat, and a significant item to be obtained before the next area opens up.  Also, each area contains a town or a castle with numerous characters to talk to in order to advance the story.

Cut Scenes, Voice Acting, and the English translation: I would estimate that 75% of the game is told through written dialogue boxes, all of which are translated to English.  However, the other 25% of the story is told through excellently animated cutscenes with spoken Japanese dialogue, or spoken Japanese dialogue in some significant scenes in lieu of dialogue boxes.  At no point did the Japanese voice acting impact my understanding of the story to a frustrating level, and its amazing how much one can discern simply from listening to an actor’s tone and inflection without actually having knowledge of the language.

The cutscenes are beautifully animated and voice-acted in Japanese, although the animation tells the story well enough for you to follow without an understanding of the language.

Difficulty: For the first third of the game, I found Startling Odyssey II to be extraordinarily easy.  The frequent enemy encounters kept my levels moving up, new weapons and armor purchases in towns gave my stats needed boosts, and the acquisition of magic spells (that occur when certain character levels are hit) made normal enemy and boss encounters easy.  A handy Auto Battle feature makes battles a cinch as well.  However, toward the end of the game, I found enemies and bosses to become far more difficult, and I needed to spend some time grinding before facing final bosses.

Saving: You save your game at inns in each town, or handily placed Save Squares in caves or towers.  Saving at either location has the useful addition of fully restoring your HP and MP, meaning if you have a Save Square just before a boss encounter in a tower, you can spend some time leveling up on normal enemies before fighting the boss if you’re not initially ready.  The game saves to the internal memory of your PC Engine or Turbografx Duo/CD attachment. 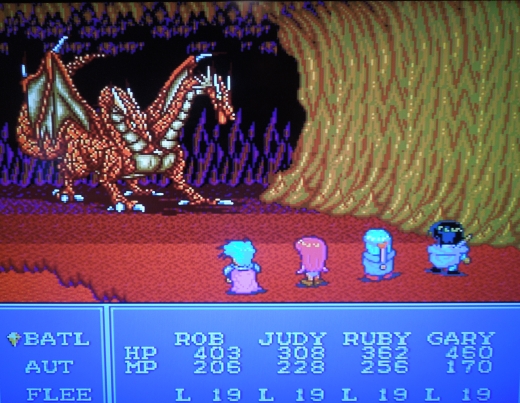 I lost count of how many dragons I fought in this game, but it was A LOT, and each one looked awesome and significantly different from the one before.

Rating:  I didn’t know anything about Startling Odyssey II before I played it, except that it was an obscure RPG that was translated to English for the PC Engine Duo.  Wow, though, it’s amazing how different games were that were released in Japan as opposed to the U.S.  This game would have needed to be heavily censored had it been released in the west.  There is frequent language, character deaths, innuendo (the main character is frequently the object of desire amongst many female characters), numerous alcohol references, and even brief nudity in several cut scenes.  If this game was a movie, it would definitely receive an R rating, and I would imagine it would get something like a 17+ game rating today.  This is NOT a game to play around younger children.

The Southern Gentleman’s Opinion and Letter Grade:  C Startling Odyssey II is an average RPG.  Compared to numerous other turn-based RPGs I’ve played over the years, this one didn’t quite measure up.  The game got annoyingly repetitive with the brush-rinse-repeat pattern of town-tower-boss again and again without significant deviations.  The English translation makes the game easily playable, but many of the dialogue scenes, be they text box or voice acting, are extremely long and become tiresome.  The CD music is generally good, but the tracts (particularly during boss fights) are too short, and repeat every 30 seconds or so.  From a personal standpoint, I found the game to be a bit too distasteful and lude far too often (enough to make it distracting instead of amusing), although others may enjoy the game’s sense of humor more.  Even if the story were less vulgar, however, I still would not have enjoyed the gameplay anymore than I did.  Average RPG.