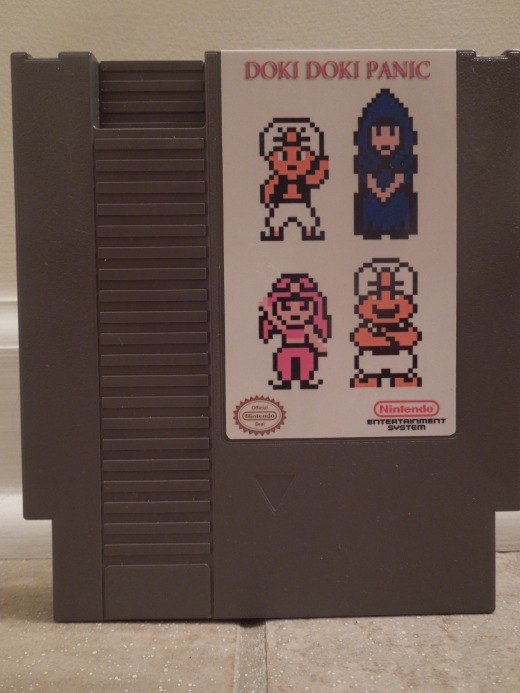 Brother carries a Bigface item in DDP. In SMB2, Brother was changed to Toad and the controversial Bigface became a turtle shell.

Note 1:  Like platforming/action games?  Check out my reviews of Kid Dracula, I’m Kid Dracula, Splatterhouse, and Super Back to the Future, Part II!

Story:  This NES Doki Doki Panic mod basically keeps the story from the original FDS release.  Two young children, Joe and Bob, are reading a story book when the hand of the evil Wart reaches out and grabs them, pulling them into the story.  A family, consisting of Papa, Mama, Brother, and Sister jump in after the children in order to rescue them. 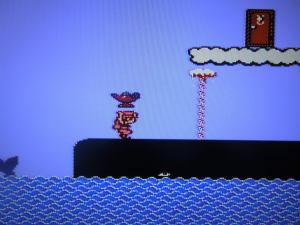 Gameplay:  You must travel through 7 levels, each with 3 stages (except for level 7, which has 2 stages), to rescue Rick and Bob from Wart.  At the beginning of each stage, you can select between Papa (changed to Mario for the U.S. game), Mama (later changed to Luigi), Brother (later changed to Toad), and Sister (later changed to Princess Peach).  At the beginning of each stage, you are allowed to change which character you want to play as.  Each of the 4 family members controls differently:  Papa is balanced with an average jump and average speed of picking up items; Mama jumps the highest, but is the slowest at picking up items; Brother has the lowest jump but picks up items the fastest; Sister has the 2nd highest jump (and the ability to kind of ‘hover’), but has below-average speed picking up objects.  During each level, you can find magic lamps (later changed to magic potions in the U.S.) that allow your character to temporarily enter Sub-Space in order to collect Heart power-ups (later changed to Mushrooms in the U.S.) or coins to use in bonus games for extra lives between levels.  You’ll frequently face mini-bosses at the end of most stages.

So, where can I find this game?  You can find the rom online (again,this is not the original Doki Doki Panic FDS game, but a mod that puts those characters into Super Mario Bros. 2 the way they were supposed to be) for play on a computer emulator.  The rom can be put onto an NES cartridge, and there are many NES reproduction websites on the Internet that can create a cartridge for you, which is the best way to play the game.

Game glitch: If Mama is little and picks up an object, she turns into a blue Luigi.

Interesting quirks:  Brother and Sister don’t have a ‘little’ mode when they get to only 1 bar of health left – they’re always little.  Mama, when little, becomes Luigi when ducking, climbing, or holding an item/enemy – albeit a blue Luigi.

Ending:  The ending of the game is still the Super Mario Bros. 2 ending.  When Wart is carried out at the end of the game, however, the 4 Doki Doki Panic characters are present instead of the 4 Mario characters, but the Mario ‘dream’ sequence still plays.

Why such a short review?  Chances are if you are a gaming enthusiast, you’ve probably played Super Mario Bros. 2, and because Doki Doki Panic basically is  SMB2, I don’t think much more need be written.

Conclusion:  Doki Doki Panic is a fun game, and it’s easy to see why this was the game that was chosen to create Super Mario Bros. 2 by changing the characters.  It has a decent amount of challenge, but with the ability to find ‘secret warps’ in particular stages, it won’t take you too long to beat.  It’s interesting to play the game with its original characters.

The ending of the game has the Doki Doki Panic characters (somewhat glitchy), but it is still the ‘Mario’ ending.