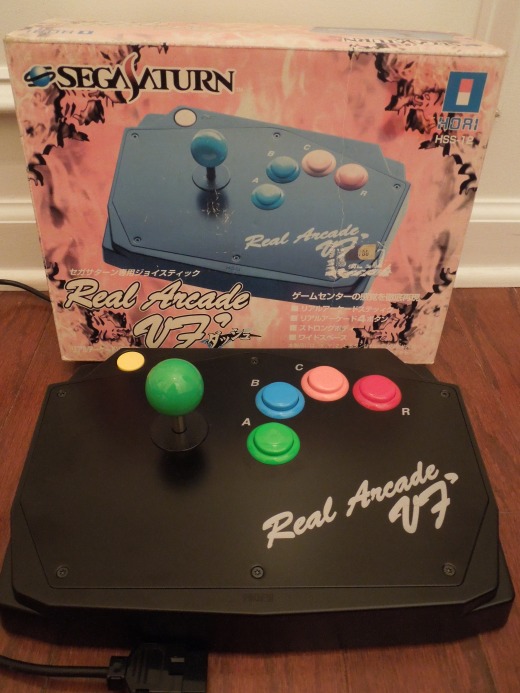 The HSS-12 dwarfs the Saturn’s model 2 control pad, yet has half as many buttons!

Note:  Interested in the Sega Saturn?  Check out my reviews of the Saturn games D & D: Tower of Doom, D & D: Shadow over Mystara, Crows: The Battle Action, Nekketsu Oyako, and Warriors of Fate!

Quick Saturn Controller History: Many different controllers were released for the Sega Saturn home console.  The Sega Saturn used 8 buttons (in addition to the control pad and Start button): A, B, C, X, Y, Z, L, R).   While the console, released in 1995, included a basic, well-made game pad (and later a 2nd release that changed some things up), Arcade Sicks were soon released to present an alternative way to play Saturn games.  The Virtua Stick was the most common.  It included all of the necessary buttons, plus turbo switches and an arcade-style stick rather than a control pad.  A second controller, the Virtua Stick HSS-0136, was also released (only in Japan).  The HSS-0136, released by Hori, was huge and extraordinarily similiar to what you would find in an arcade.  It included all 8 buttons, and they were large and round, like those on an arcade cabinent.  Also, the control stick was clicky, much like those in the arcade.  For many Saturn gamers, the HSS-0136 is the pinnacle of controllers for the Saturn.  However, there was another arcade stick that is extremely obscure that was made for the Saturn and was only released in Japan – the Real Arcade VF Dash, model no. HSS-12, which was also made by Hori (a company famous for making great controllers) – this a review of that controller. 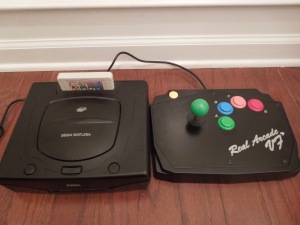 The ‘Dash’ is approximately the same size and weight as the Saturn console.

So, why does the controller only have 4 buttons when regular Saturn controllers had 8?  The letters ‘VF’ are in the controller’s title, and perhaps this stood for ‘Virtual Fighter,’ a game that was released when the Saturn came out – perhaps this controller was made for that game, and it only needed 3 or 4 buttons to play (I can’t confirm any of this – just an educated guess).  I think the lack of buttons is the reason the controller possibly didn’t sell well in Japan, or if it did, why it isn’t known in the U.S.  Most Saturn games use more than just buttons A, B, C, and R.  Therefore, you aren’t able to play many Saturn games with the HSS-12 (or the HSS-09, which didn’t even have the R button).  What happens when you need to press X in Marvel Super Heroes vs. Street Fighter?  You can’t because it’s not there!

Compatible games: I sought out this controller for one reason: to play Dungeons & Dragons: Tower of Doom and Dungeons & Dragons: Shadow over Mystara, two games released in Japan.  Those games are arcade-perfect ports and the games use exactly 4 buttons: Attack, Jump, Scroll through items, and Magic (you can change the button layout in the Options menu). Playing using the HSS-12 recreates the arcade experience of Dungeons & Dragons on the Saturn.  I soon discovered that many other Saturn games don’t need any other buttons to play besides A, B, C, and R.  Here is a short list of games compatible with the Dash:

The HSS-12 is approximately the same size as a Neo Geo X controller, yet much, much heavier.

Crows: The Battle Action – (Technically, the game uses 6 buttons, but you can change the button layout in the Options menu – you don’t need ‘Taunt’ or ‘Block’ – you’ll never miss them)

Gunbird: (PERFECT controller for this shoot ’em up game!)

Astal: (buttons A, B, and C are of course the main attack, jump, and special buttons depending on how you set the configuration, and button R scrolls through the uses for the bird.  Excellent way to play Astal!)

Blazing Tornado: (this game is a port of an arcade wrestling game, and you only need A, B, and C)

Pocket Fighter: Unlike so many other CPS2 ports, this one doesn’t need any more than A, B, and C)

Elevator Action Returns: Only the A and B buttons are used for shooting and jumping.  You can, however, change the controls so that your ‘bombs’ button is mapped to the C button if you like (instead of having to press A+B).  Excellent arcade port already, but better when played with this controller!

The Controller Itself:…is AWESOME.  It is, beyond all doubt, the best video game controller I’ve ever played with.  It feels like you’re playing with a stick and buttons from a real, old-school arcade cabinent.  The controller is heavy, for starters.  The top and bottom plates are made of solid metal instead of plastic.  I’m not sure what’s inside, but this is one bulky controller (in the good way).  The stick itself works great.  It is an 8 way stick that ‘clicks’ in all directions.  The 4 buttons – A, B, C, R – are all HUGE, just like arcade buttons, and are great for rapid tapping in Beat ‘Em Ups and Shooters.  The controller works great on your lap or on a coffee table in front of you.  It comes with a 6 foot cord attached to it, so I recommend buying a Saturn controller extensi0n (really cheap online) if you sit further from your tv.

Where can I find this HSS-12/Dash controller?  It may pop up on ebay from time to time, but as I mentioned, I’ve only ever seen it once.  Doing a broad Internet search may come up with something.  You can easily find the HSS-09, which is exactly the same controller, except that it’s missing the R button.

Conclusion:  This controller is fantastic.  Sure, you can’t play all of your Saturn games with it because of it only having 4 buttons, but if you like Beat ‘Em Ups and Shooters, most of those games don’t need the extra buttons anyway.  Make sure you do your homework on what buttons individual games use, and if they have an option to change the button layout.

The Southern Gentleman’s Opinion and Letter Grade:  For compatible Saturn games (many of which are arcade-perfect ports anyway), this controller is the BEST.  A++