*Check out my youtube video about this game:  My channel is ORO Video Games (just type it in the search engine).  I’ve reviewed this game and several others.  Thanks & God Bless!

Note 1:  Like wrestling games?  Check out my reviews of Saturday Night Slam Masters and WWF WrestleFest!

Note 2:  This game was played on a Neo Geo AES home console that has been modified to output in component video (red, green, blue).  It was connected to a 32-inch HD tv. 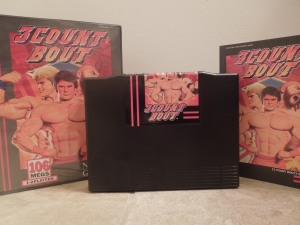 3 Count Bout is known as Fire Suplex in Japan.

Quick History:  3 Count Bout (known as Fire Suplex in Japan) was released for the Neo Geo AES home console in 1993.  While the game itself was a common enough release for the AES as well as the Neo Geo MVS (arcade cabinet), many wrestling-game fans are unfamiliar with it.

Modes:  3 Count Bout has 3 modes of play: 1 Player vs CPU in Singles Matches, 2 Players vs CPU in Tag Matches (co-op), or 2 Player VS (competitive singles match).

2 Player co-op:  You each select a wrestler (you can both pick the same guy) and compete in 5 tag-team matches.  Like the 1 player mode, you’ll wrestle in 4 different environments.  In the ‘ring’ matches, D tags your partner when in your corner.  While on the ring apron waiting for a tag-in, tapping A will regain power, adding some strategy to the game.  If the CPU attempts to put you in a submission hold or pin you near your corner, you partner can get in the ring to break up the hold or pin.  Likewise, if you go for a pin or submission near the CPU’s corner, the CPU’s partner will get in and break things up.  If you throw the CPU player out of the ring on your side, your partner can get out and you can both beat up on him (just make sure the legal man is back in the ring by the 20 count).  If you, however, get thrown out of the ring on the CPU side, he and his partner will double-team you, so try to get back in the ring quickly.  In the warehouse and alleyway matches, you still have to ‘tag’ each other in and out – the non-legal man waits at the top of the screen.  To win this match, you have to knock out both of your opponents.  To lose, both you and your partner have to be knocked out.

Whether in 1 Player or 2 Player co-op, once you get to Red Dragon, the game becomes extremely difficult.

2 Player VS:  You each select a wrestler (you both can pick the same guy) and compete in a 1 on 1 match.  You can select from the game’s 4 environments.  This a great VS mode, where both human players have equal chances to win grapples.  On an interesting side note, in the 2 Street Fight matches (alleyway and warehouse) if players knock each other down at the same time with no energy left and neither can answer the 10 count, instead of a double-disqualification, Player 1 wins!

Basic Control:  A punches.  Pressing A rapidly and holding forward causes a character-specific move, like a bite or blowing mist in your opponent’s eyes.  B kicks.  C jumps.  D pins an opponent when he is down or tags your partner in 2 player co-op.  Pressing A+B executes a dash/escape move.  Quickly pressing Away, Toward A executes a useful dash attack.  Pressing B by a downed opponent puts them in a submission hold – pressing C drops a knee or elbow on them.  When in close to an opponent, you’ll automatically lock up in a grapple – tap A rapidly to win the grapple, then any combination of joystick directions + A or B to execute different wrestling moves (hitting A + B when you’ve won a grapple on a weakened opponent executes a finishing move).  You can also climb the top two turnbuckles and jump off at opponents by pressing A.

Music & Sound:  The music is average, nothing terribly memorable.  It changes for some of the matches.  The sound effects are decent.  A nice touch is the many-voiceovers for the wrestlers, and before each match (entirely skippable by pressing A), a ring announcer introduces each wrestler – no during match commentary, sadly, except when you win – “3 count fall!!!”

Having a co-op Tag-Team Mode is something the game does right.

Characters:  3 Count Bout has 10 selectable characters.  All are fictional, but they are huge and all look great.  Terry Rogers, Red Dragon, Leo Bradlay, Roy Wilson, Master Barnes, Blubber Man, Blues Hablam, Gochack Bigbomb, and Big Bomberder (all spellings are from the game).  Blubber Man and Blues Hablam look exactly alike, except the latter wears a mask – their moves are the same.  Gochack Bigbomb and Big Bomberder look exactly alike, except the former wears a mask – their moves are exactly alike.  Each wrestler (apart from the two pairs I just mentioned) has their own unique move set, speed, and strength.

Difficulty:  Here’s where everything takes a downturn.  You have 4 selectable difficulties:  Easy, Normal, MVS (arcade difficulty), and Hard.  Select Easy, because it’s the only chance you have.  The problem is, once you get to the 3rd match vs. Red Dragon (or 2nd match in co-op vs. Leo Bradlay and Red Dragon), the CPU’s ability to win grapples amps up to approximately 85%, and to make things worse, the CPU attacks RELENTLESSLY.  While punching the CPU before locking up in a grapple increases your chances of winning the grapple and pulling off a move, even this can be tough.  Your best bet is to go for jumping attacks, off the turnbuckle attacks, and utilizing your wreslters Away, Toward, A dash attack.  Tagging in c0-op is a must, as you can regain some energy on the outside, but winning tag matches (after the easy first one) is just as difficult as singles matches, as the CPU’s constant attacking makes it tough for you to even get to your partner.  Can the game be beaten?  Yes, I have done it multiple times, but only with TREMENDOUS patience and cheap, repetitive tactics.  If you can beat all 10 opponents in single player using the game’s unchangeable allotment of 4 credits (meaning you can’t continue more than 4 times following losses), consider yourself the master or 3 Count Bout.  Fortunately, if you have a Neo Geo Memory card, you can save the game after you use all of your Credits, then continue from there.

There are tons of amazing wrestling moves to utilize, if you can manage to win grapples.

So, where can I find this game?  It is easy enough to find an AES cartridge or MVS arcade cartridge on eBay.  Also, the game is one of the 20 included games on the Neo Geo X handheld.  You can play the rom on a computer emulator.

Conclusion:  First, what this game does right –  it doesn’t matter that 3 Count Bout doesn’t have real wrestlers – that’s perfectly fine.  The 10 included wrestlers all look great, and take up a large amount of the screen.  The street fights and electrified-ropes match are particularly great ideas, and it’s really fun bashing your opponent with a baseball bat wrapped in barbed-wire or body-slamming him into the ropes and watching him get shocked.  Co-op was a great move, although more intuitive co-op where your partner has more chances to get involved or tag-team moves could be used would have improved this aspect.  But the difficulty is too much.  You’ll have a great time in the first two matches in 1 Player Mode where you can actually win grapples, or in the first tag match in 2 Player co-op.  But once you get to Red Dragon (and everyone else after him), the game goes from being a fun wrestling/fighting game to a game of “How many cheap, quick moves can I try to use on this guy before he utterly destroys me?”  It’s unfortunate, because if only the difficulty wasn’t so ridiculous, this would be a wonderful wrestling game.  You will lose a ton of matches, get angry, and wonder why this game was programmed this way if you play 3 Count Bout, make absolutely no mistake.

The Southern Gentleman’s Opinion and Letter Grade:  Comparatively, 3 Count Bout can’t hold a candle to fellow arcade wrestling game, WWF WrestlFest.  If you’re a Neo Geo fan and want a wrestling game, maybe you might consider this, but beware.  C-