Note 1: Interested in arcade sticks/controllers?  Check out my review of the Sega Saturn VF Dash! 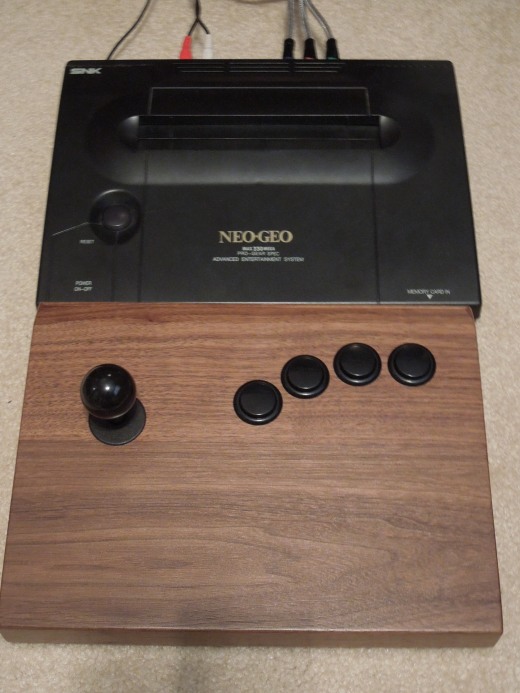 Analogue Interactive Products:  You can easily Google the website, but Analogue Interactive started making Neo Geo consolized-MVS home consoles a couple of years ago.  These are basically consoles that will play Neo Geo MVS arcade cartridges (since these larger cartridges won’t fit into the Neo Geo AES console).  In addition to this home system, Analogue Interactive also produces arcade sticks that work on their own consolized MVS system, or your Neo Geo AES (and actually the Neo Geo CD system too – the controller will work on all 3 consoles).  This review is of their Walnut Arcade Stick.

The Controller:  You can look at all their ‘Tech Specs’ (and I encourage you to do so) on their website, but basically, the controller is made of 100% hand-crafted, walnut wood – it has a smooth, glossy finish.  The joystick and buttons are the exact same parts, quality, and design as you would find on a Japanese MVS arcade machine.

The Stick:  I am not an expert on arcade sticks, although I enjoy playing games with them, but I know this – this joystick kicks some serious tail.  It has a light ‘clicking’ noise when you pull it in all directions, and from my experience, perfectly mirrors a real arcade stick from an arcade cabinet.  The ball is comfortable and smooth, and you’ll have no problem executing special moves in fighting games or getting your on-screen character to do what you want in whatever game you’re playing.

The Buttons:  The buttons are not labeled like on other Neo Geo AES controllers, but that doesn’t matter.  A, B, C, and D are all comfortably placed, ergonomically speaking, for playing any Neo Geo game.  The Start and Select buttons are actually not on the main ‘face’ of the controller, but rather on its front.  Personally, I don’t care for this as much, but they’re not hard to reach and you don’t use them much in any case.  The buttons themselves are fantastic.  I noticed an immediate difference between playing Neo Geo games with the traditional controllers and this one – the Analogue Interactive Arcade Stick is way, way, WAY better.  Particularly in games like 3 Count Bout or Stakes Winner where you are required to furiously beat button A – the response is so much smoother and faster with the AI Arcade Stick than the other controllers.  The buttons also just seem much, much nicer than the older ones – I assume this is because they use the ‘original arcade parts.’ 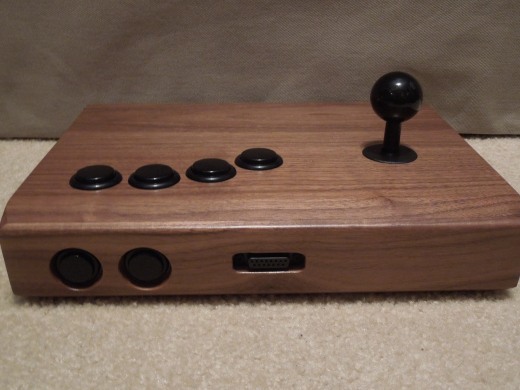 The Start and Select buttons are not on the face, and you can unplug the cord from the controller.

Cut the cord: Another great thing about the controller is the fact that you can remove the wire from the back if you want to – no more wrapping the wire around the controller when you need to store it – this is a nice touch.

Can I open the controller up?  The answer appears to be ‘No.’  The only visible screws on the controller are on the bottom – 4 of them.  I removed them to see if I could get the bottom to come off and see what was inside, but the wood on the bottom appears to be sealed on separately – the screws, perhaps, were just holding the joystick in place – I’m honestly not sure.  The controller is of the highest quality, and I anticipate no problems with is functionality, but it would be more comforting to know that I could easily get into it to clean/repair if I ever needed to.  There may be a way to pry off the bottom without damaging the controller, but I’m not sure I’d every risk it.

So, where can I find this controller?  Check out the Analogue Interactive website.  Many other websites have reviewed this controller (and their console, for that matter), and I’ve yet to read anything negative.  My controller took over 2 months to arrive, so keep that in mind.

Conclusion:  This controller is something special.  It is superior, in appearance and playability, to the regular Neo Geo controllers.  The fact that it’s made from Walnut is incredible – I’ve never heard of anything else like it.  It is quite a hefty controller (it felt heavier than the actually Neo Geo AES console), but this is what you want in an arcade controller.  While I’m not crazy about the location of the Start and Select buttons, and I find it slightly concerning that you can’t easily (or possibly not at all) get into the controller if you ever had a problem with a button, this controller is of the highest quality – that much is clear.

UPDATE:  About a year after buying this controller (and using it often), the SELECT button stopped working completely (which was odd considering I rarely even used it, since it only functions as ‘pause’ in Neo Geo AES games).  I tried the controller test on my Neo Geo and sure enough, it wasn’t functioning.  I have no idea why, and unfortunately, because I couldn’t open the controller, I ended up selling it on eBay and bought a used MAS Neo Geo stick as a replacement, which has been going strong for years now (working ‘good as new’ as of 2018).  Needless to say I was quite disappointed in Analogue since I would have assumed this controller would last for a long time, not just over a year.  I don’t know if this was a problem with their other controllers (hopefully it was just mine that had some internal issue), and while I played using the controller, I always took great care of it, but this sadly was my complete experience with it.

The Southern Gentleman’s Opinion and Letter Grade:   A+, had it worked for years and years.  D- for me, however, since for the price and time it took to be delivered, it malfunctioned in a year.