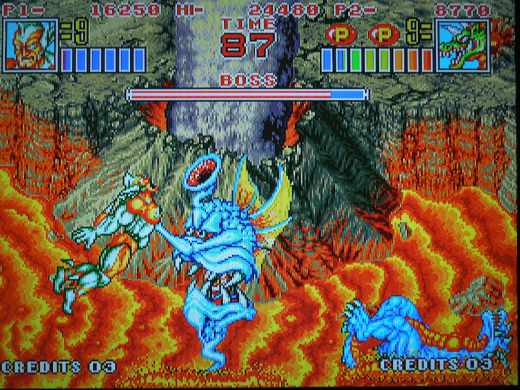 King of the Monsters 2 for the Neo Geo AES

Note 1:  This game was played on a Neo Geo AES home console that has been modified to output in component video (red, green, blue).  It was connected to a 32-inch HD tv.

Quick History: King of the Monsters 2: The Next Thing was released for the Neo Geo AES home console in 1992.  It is the sequel to the original King of the Monsters, a game in which the player (or 2 players co-op) selected one (or two) of 6 monsters and fought through 12 levels of ‘monster battles.’  King of the Monsters 2 follows very much in its predecessor’s footsteps, with a few changes.  The game is very reminiscent of Godzilla or King Kong movies in both its ‘monsters’ and some of the ‘city’ stages in which battles take place. 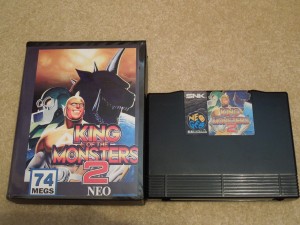 King of the Monsters 2 is not difficult to find for the AES.

Players:  1 or 2 Players, either co-op or competitive

Memory Card Support: Yes.  After you use up your 4 given Credits (3 lives per Credit), you can save your game, and start back on the last stage you were on.

Story:  Believe it or not, there actually is a story.  3 years after the events in the first King of the Monsters, only 3 of the original 6 monsters have survived, and they’ve become even more powerful.  The 3 monsters travel around the globe to protect cities from invading alien monsters, lead by the evil Famardy (yes, that is the final boss’ name).

Gameplay:  After you pick your monster (in 2 player co-op, you cannot choose the same character), you’ll play through 7 stages, two with the names ‘American City’ and ‘French City,’ and some with obscure locations like deep under the sea or inside a volcano.  Most stages include a short scrolling sequence where you’ll battle minor enemies like planes, tanks, or bizarre aliens before quickly arriving at the stage’s boss.  The final stage of the game has you running the gauntlet of the previous 6 bosses before finally getting to battle Famardy.

2 Player VS Gameplay:  Each player picks one of the 3 monsters (you cannot pick the same monster), and battles in a Best of 3 match-up.  If matches end in a draw, you’ll keep battling until one fighter has won 2 matches.  You can find power up icons in the city you fight in, and occasionally, planes or other minor enemies may attack either players’ monster.

VS. mode, although simplistic, is quite fun.

Leveling up and Pick-Ups: Your monster can ‘level up’ twice by picking up Power (P) icons.  When he levels up, his color palette changes.  At levels 2 and 3, your character gains more powerful charge attacks.  You can also pick up Power Down icons – they are a reversed, darker ‘P’ that will drop your character down a level (not a good idea), Life Up (L) icons, which restore some of your health, and Points Pick Ups (gold bars).  There are also Question Mark (?) icons that could be any of the previously mentioned icons.  You find icons by defeating minor enemies or destroying objects like buildings in each stage. 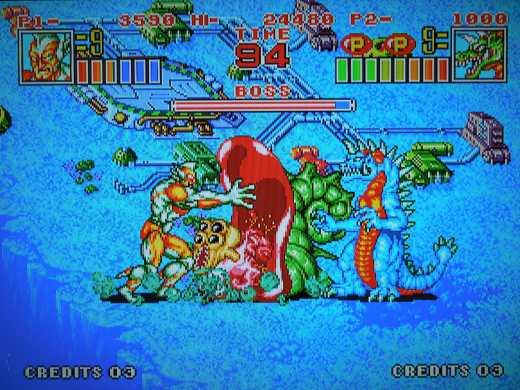 1UPS and Bonus Stages:  Some stages begin with your monster falling out of the sky.  Just before you hit the ground, you’ll be encouraged to hit ‘A’.  If you time it just right, you’ll land on your feet and be awarded a 1UP.  Also, between some stages, you’ll engage in short ‘Bonus Battles’ for extra points (no extra lives are ever awarded for reaching particular point totals, unfortunately).

The Stages: The stages, although short, look fantastic.  You’ll recognize national landmarks (that you can destroy) like the Eiffel Tower and Mount Rushmore (which is incorrectly placed in the Grand Canyon).  A lot of detail has been put into each stage, and the explosions from destroyed enemies and objects look great, and they add to the ‘destructive’ feel of the game.

Difficulty:  Hard, very hard (even if you select ‘Easy’ mode).  The bosses that you’ll face at the end of each stage look unique (and awesome).  The first few aren’t TOO bad, but the problem is that when you grapple with them (and you’ll typically grapple a lot), they will win at least 75% of the time.  When you first encounter them, you can typically win the first grapple or two, but that’s it, at least until they kill you and you start back with a new life.  Then you can typically win a grapple or two again before they dominate you.  However, you can repeatedly use jumping attacks with some success, and if you hit a Level 3 charging projectile attack on them, you can often set yourself up to keep on doing it every time they get up.  With two players, the game becomes slightly easier, but without being able to win even half of the grapples, you’ll need to utilize cheap tactics to come out on top without using up lives and Credits.

Famardy: The last stage is absolutely brutal with the gauntlet of bosses, followed by Famardy.  Famardy might be the hardest, ‘cheapest’ boss in the history of video games.  You can’t grapple with him, meaning you can only chip away with punches and kicks and hope to have enough time to power up for a charge attack.  I honestly think it’s literally impossible to beat the game with only 4 Credits (3 lives per Credit), even if you use a Memory Card and start at the final stage, Stage 7.  If you somehow survive the gauntlet and actually make it to Famardy, that is an accomplishment unto itself.  I had to use an infinite life cheat code from my system’s uniBios to beat the game.

Charge Attacks are the key to advancing far into the game.

So, where can I find this game?  It’s not terribly tough to locate this Neo Geo AES game.  It can be found on eBay usually.  I believe there was a Neo Geo CD version, and it was also ported to the SNES and Sega Genesis, although I think those ports changed some thing up from the Neo Geo game.

Conclusion:  Despite the game’s small roster of playable monsters and extremely tough difficulty, I really enjoy playing King of the Monsters 2.  It’s a great co-op game, and you can definetly make it farther with two players working together (you cannot hit each other in 2 player co-op, fortunately).  I’ve made it as far as the Stage 5 boss, Aqua Slug, using the given 4 Credits.  In order to not get really frustrated with this game and be successful, you’ll really have to learn how to utilize the jump attacks and the charge attacks.  The game is reminiscent of playing the much more well known Rampage games – that’s the only comparison I can think to make.  If you can handle the difficulty and learn to counter the bosses cheap grapple-wins with your own cheap tactics, this can be a fun game.  But forget about the final boss – he really, really sucks.

The Southern Gentleman’s Opinion and Letter Grade:  Average game in most ways, but there’s something timeless about fighting monsters.  C+