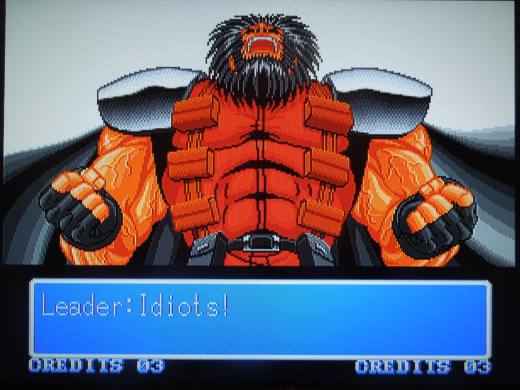 Note 2:  This game was played on a Neo Geo AES home console that has been modified to output in component video (green, blue, red).  The Neo Geo AES was connected to a 32-inch HD tv.

Quick History: Shock Troopers was released for the Neo Geo MVS (arcade cabinet) in 1997.  The game never received a release for the Neo Geo AES, the home console version of the arcade cabinet (there was no difference in the actual games, only the size of the cartridges).  Today, however, Shock Troopers is one of the more popular MVS candidates to receive a conversion – taking the arcade boards from an MVS cartridge and placing them into an AES cartridge.  The Shock Troopers used in this review is an AES conversion. 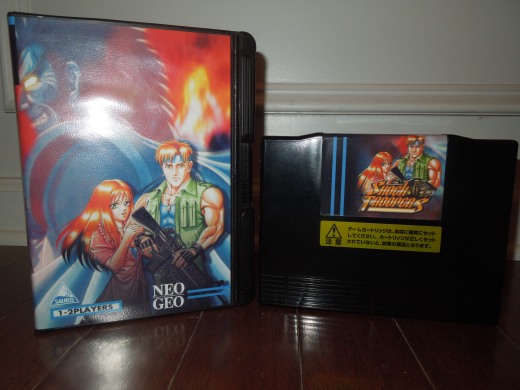 Shock Troopers is an AES conversion.

Different versions of the same game? Two different versions of Shock Troopers exist, and from the little I’ve been able to read about the subject, they are known as Versions A and B.  Version A does not start your character(s) with a full life bar (although the life bar takes longer to deplete than in Version B), has a Star Rating System that awards extra health at the beginning of each stage and impacts how quickly your character can move for a particular stage, and it requires all 3 characters in Team Mode to share the same life bar.  Version B starts your character with a full life bar (although the life bar depletes more rapidly than the ‘mostly’ full life bar in Version A), the Star Rating System is not present (so you’ll never be able to gain bonus health at the start of levels, although your character does still seem to retain the ability to move somewhat faster, inexplicably), and all 3 characters in Team Mode have separate life bars.  The version used for this review is Version B.  Having played Version A of Shock Troopers on my Neo Geo X handheld, I very much prefer Version B.  Version B feels easier to me because of the separate life bars of each of your characters in Team Mode – this gives more of a reason to switch characters as you find health pickups – you are able to stay alive longer by giving food only to your soldier who needs it. 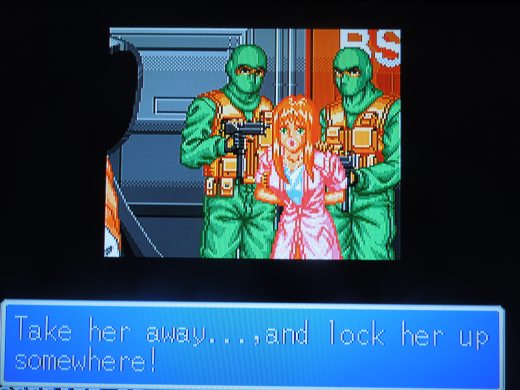 Cutscenes tell the story between stages.

Memory Card Support?  No.  Shock Troopers is one of the few Neo Geo games that does not use the memory card in any capacity.  Therefore, beating the game requires a straight playthrough.

Credits:  You are given exactly 4 Credits to beat the game.

Story: A terrorist group known as the Bloody Scorpion Group (BSG) have kidnapped a scientist, Dr. George, who has discovered how to create a ‘personality-altering’ drug, a301, that the terrorist group’s leader believes can help him create super-soldiers.  Additionally, the Terrorist Leader has kidnapped Dr. George’s granddaughter, Cecilia, and is threatening to kill her if the good Dr. George doesn’t cooperate and start producing large amounts of a301 to help the Terrorist Leader achieve his goal of world domination.  Cecilia’s boyfriend, Jackal, and the other Shock Troopers are sent in on a mission called ‘Operation Delta Storm’ to eradicate the Bloody Scorpion Group, kill the Terrorist Leader, and rescue Dr. George and Cecilia. 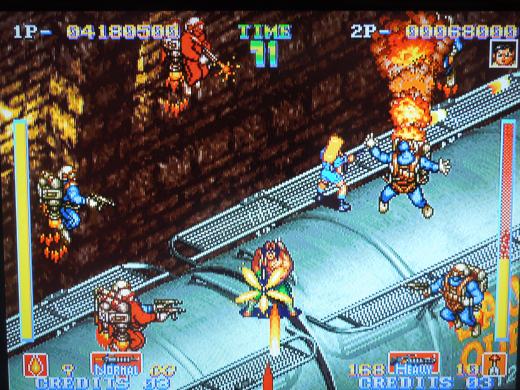 The Bloody Scorpion Group must be eradicated.

Characters: Choose between 8 characters of varying strength, defense and speed – 5 males and 3 females:  Jackal, Milky, Loki, Rio, Southern Cross, Marie Bee, Maru, and Big Mama.  Big Mama and Southern Cross move slowly but can take more damage before dying; Milky and Marie Bee move very quickly but are killed more easily; some of the other characters have a balance of speed, defense, and regular fire power.  Additionally, each character has a different ‘special’ attack (grenade, rocket launcher, etc.) in limited supply and of varying strength.

Each character handles a bit differently with regards to speed, power, and defense.

Modes: There are 2 ways to play Shock Troopers.  ‘Lonely Wolf’ allows you to select 1 of the 8 characters and battle your way through the 7 stages of the game.  For each of your 4 Credits in Lonely Wolf, you’ll get three lives for your chosen character.  The other option is ‘Team Mode,’ where you’ll select 3 of the 8 characters, and can switch among the 3 at any time.  For each Credit in Team Mode, all 3 characters must die before it’s Game Over and you have to continue.  Another difference between the two modes is in Lonely Wolf you receive a larger stock of your ‘special’ weapon for each life of your character.  Rio, for example, in Lonely Wolf, will have 15 exploding arrows for each of his 3 lives on 1 Credit; however, when Rio is selected as part of a 3-person group in Team Mode, he will only have 10 exploding arrows (his team members also have a reduced number of specials).  This discrepancy brings balance between the two modes, making it a matter of strategy which one you choose – more firepower or the chance to sustain the lives of my characters longer by switching among them?

Gameplay: Shock Troopers is a top-down ‘Run and Gun’ shooter.  Button A shoots.  Holding it down allows you to maintain a constant stream of bullets.  You can shoot in 8 directions, and while pointing your character in a specific direction and holding A, you still have the ability to move around while firing, which is a great control scheme.  Button B ‘rolls’ your character, and this allows you a temporary period of invincibility as you dodge bullets; rolling is absolutely crucial to mastering the game.  Button C unleashes your special attack (grenades, rocket launcher, etc.).  Button D (in Team Mode) switches among your 3 characters.

Bosses often require a ton of firepower to bring down.

Stage Choices:  At the beginning of the game, you can choose amongst 3 different ‘paths’ to get you to the Terrorist Leader of the Bloody Scorpion Group: Mountain, Jungle, or Valley path.  After Stage 3 of each path, you’ll have the option to change routes and select one of the other two paths.  No matter which path you choose, or regardless of if you stick to it or not, you’ll always play a total of 7 Stages.  It’s great to have the selection, and it adds replay value to the game.

Pick-Ups: As you gun down the soldiers and vehicles of the BSG, you’ll pick up various weapon items that strengthen your normal gun’s firepower.  My favorite is the interestingly named ‘3-way’ that is basically a spread gun.  You’ll only have a limited stock of each weapon pickup, but you’ll constantly find more scattered across each stage.  You’ll also find special pick-ups labeled ‘Bomb’ that increase the number of specials you can use.  Occasionally, blowing up buildings or shooting crates reveal steaks or bananas or other foods that increase your health bar by varying amounts.  Another way to keep your character(s)’ health up is to go for a ‘melee’ kill on the soldiers you encounter – if you kill them at close range (your character will automatically pull a knife or use his or her fist) instead of using your gun, they’ll often drop a ‘Life Up’ icon that increases your health bar a bit.  They may also (and more frequently) drop a Blue Diamond bonus points pick-up when killed this way.  Sometimes they’ll even drop a Red Diamond that kills everything on the screen or a Yellow Diamond that makes you temporarily invincible.

Stage Layouts and Bosses: Most stages have you walking through them blasting everything in site, but variations on stage layouts include: a scene riding motorcycles (while shooting bad guys), a scene climbing a sheer rock face (without a rope?!! oh, and while shooting bad guys) and hitching a ride on a train (while shooting bad guys), among many others.  At the end of every stage is a Boss.  Typically the boss is huge and mechanical, like a Helicopter or a massive Tank.  Sometimes, however, the boss is a regular human (albeit who takes a ton of shots to kill), or you’ll have to fight the human boss after you destroy the mechanical boss.  Stage 7 and the final fight against the Terrorist Leader is a strictly human-on-human boss fight.

Japanese voices? When you beat a stage, your character(s) typically does a pose and says something in Japanese (this seems to be regardless of the regional ‘setting’ of your Neo Geo).  Oh, and while I’m at it, there is no blood on the European Console mode, but there is a ton of it on the USA and Japanese Neo Geo consoles.  All text is in English (albeit with spelling errors occasionally, as is typical with Neo Geo games).

High Score?  If you’re going for a high score in this game, then going for the melee kills on soldiers is the way to go, as collecting the Blue Diamonds they drop when killed that way will boost your score quickly.  I enjoy playing the game while allowing myself only 1 Credit on the MVS difficulty and recording my high score (the old notebook method since you can’t actually save your score).  You can, of course, also try to set a high score by allowing yourself use of all 4 Credits because your score rolls over (doesn’t reset to zero) if you choose to continue.  My current high score is just over 5 million points using Rio in Lonely Wolf Mode, MVS Difficulty, 1 Credit only.

Different character endings? While the core ending is the same, using different characters allows you to see a specific ‘What are they doing now that they’ve saved the world?’ screen for the character(s) you used.

Other platforms? That I know of, Shock Troopers was released for the Neo Geo X, Wii Virtual Console, and on a compilation disc for multiple systems in the past few years.

Each character has a unique “Where are they now?” ending.

Conclusion: Shock Troopers is absolutely one of the best games I’ve played on the Neo Geo.  The control, the character selection, the alternate paths, the sound and music (which are both excellent), the hilarious cutscenes that advance the story between stages), the co-op mode – all combine for a terrific Run and Gun with loads of replayability.  Negative aspects?  I suppose the lack of memory card support hurts the game somewhat, although a straight playthrough can be done in around half an hour, give or take.  As with many Neo Geo AES games I enjoy the 4 Credit limit, as this forces you to learn how to master the game if you want to make it to the end.

The Southern Gentleman’s Opinion and Letter Grade: Outstanding, A++