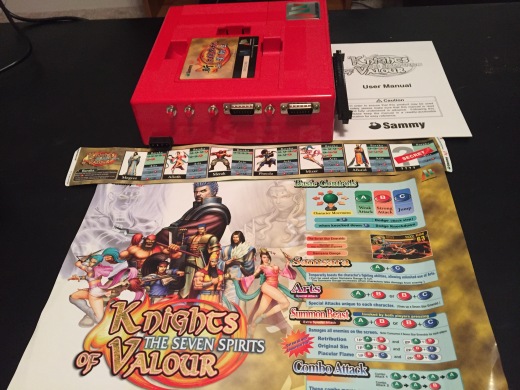 Note: This game was played on a Sammy Atomiswave that has been ‘consolized’  (made to play on a television like a regular home game console), rather than in an arcade cabinet.  This console version of the Atomiswave has an HDMI port, two ports for connecting Neo Geo controllers, and buttons for adding Credits (Coins) and accessing the System Menu, where things like adjusting the language or number of lives can be done.  *Atomiswave cartridges are roughly the size of Super Nintendo cartridges, and they could easily be taken out of the motherboard for convenience to arcade owners and replaced with other Atomiswave games; this easy cartridge switching made the Atomiswave a good candidate for consolization, in my opinion, as it truly feels like a game console. 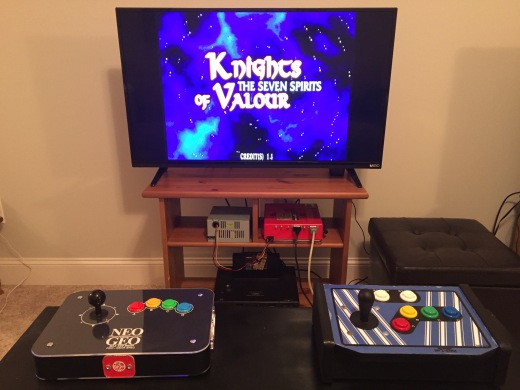 History: Knights of Valour: The Seven Spirits was released for the Sammy Atomiswave arcade cabinet in 2003.  It is one in a series of games in the Knights of Valour series.  As far as I can discern from the limited information on the Internet, the Chinese historical novel Romance of the Three Kingdoms serves as a foundation for some of the game’s characters and battles.

There are 8 chapters of Beat ‘Em Up action in KoV: The Seven Spirits.

Overview: Despite it’s release being long after the general decline of the Beat ‘Em Up genre, KoV: The Seven Spirits is, at its core, a classic Beat ‘Em Up.  You choose your character, walk right, and pummel any and everything in sight.  Boss fights await at the end of each ‘chapter.’  Special moves, health & magic pick ups, and treasure pick ups (points) – all general staples of the genre, are found here. 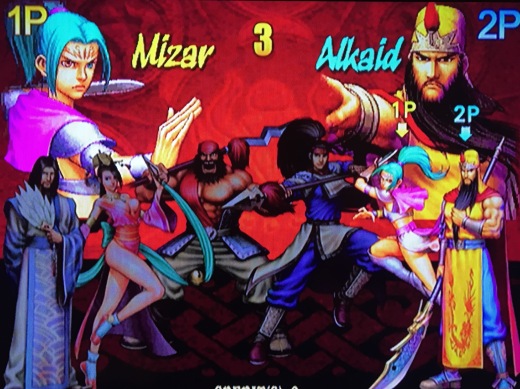 6 unique characters, each with his or her own story, are available for selection.

Characters: *6 characters are available at the start of the game (a 7th ‘hidden’ character, who I have not uncovered yet, appears to be available, according to the sticker that arrived with the game).  Megrez, Alioth (female), Merak, Phecda, Mizer (female), and Alkaid comprise the fighters in KoV: The Seven Sprits.  As one might expect, each has his or her own speed and strength levels and special attacks. 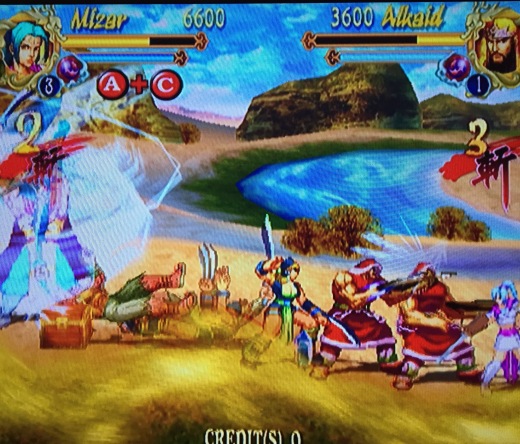 Control: KoV: The Seven Spirits uses the control stick and 3 action buttons.  Button A serves as a regular attack, Button B as a ‘hard attack’ or secondary attack, and Button C is jump.  Combination hits are easily chained when pressing A multiple times, and often when mixing in Button B.  Dashing is achieved by pressing Toward, Toward.  Each character also has unique ‘Arts,’ or special attacks achieved by pressing button combinations (often when prompted onscreen).  For example, Mizer’s Arts are ‘Hail of Bolts from a Clear Blue Sky,’ activated by pressing A+B, or her ‘Double Fang Flash,’ activated by pressing B+C.  Additionally, if playing with 2 players, ‘Summon Beast’ specials can be activated if BOTH players press combinations at the same time.  For example, if both players press A+B at the same time, the ‘Retribution Summon Beast’ special is activated, or if Player 1 presses A+B and Player 2 presses B+C, the ‘Original Sin Summon Beast’ special is activated.’  These deal tremendous damage to enemies. 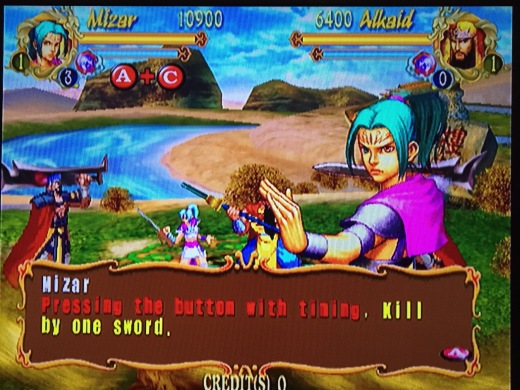 Gauges:  The characters have a Life Gauge and a Samsara Gauge (called the ‘Reincarnation Gauge’ in the User Manual).  The Life Gauge can be replenished by finding health pick ups (hearts).  The Samsara Gauge is accompanied by a number from 0 to 7.  This refers to the number of Star Balls (Baraka Spheres) you have.  Pressing A+B or A+C uses one of the balls and activates a special attack.  The Samsara Gauge fills slowly through fighting – when it fills, you’ll be prompted to press A+C – now the bar will slowly decrease, and during this time you can use unlimited special attacks.

Story: Between the onslaught of soldiers you encounter, the story is advanced through dialogue between the selected characters and boss characters.  Many of the dialogue exchanges seem to have political undertones or larger, more war-related overtones.  I found most of the dialogue (which is brief – this an arcade Beat ‘Em Up, after all) amusing, if for no other reason than the fact that the English translation was about on par with Neo Geo English translations – that is to say, the translation isn’t all that great, most of the time. 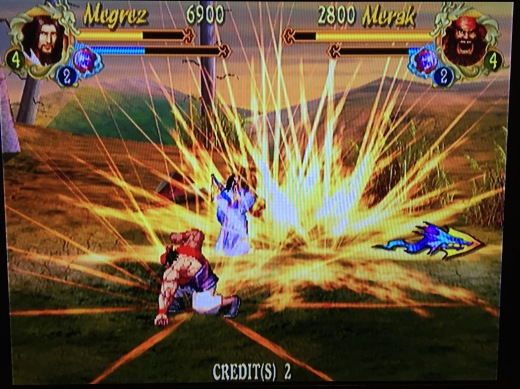 Two-player only special attacks give an added reason to team up with a friend.

Chapters:  Battle through 8 chapters to complete the game.  Each character has his or her own unique Chapter 1 (this will be Player 1’s stage if there are 2 Players).  After that, choices are presented to the player – you can choose which village to save or which oppressive empire to topple through single-handedly destroying an entire army.  It adds great replay to the game, and I haven’t seen this type of structure in a Beat ‘Em Up on this scale in a game before, other than the two Dungeons and Dragons games (see my reviews). 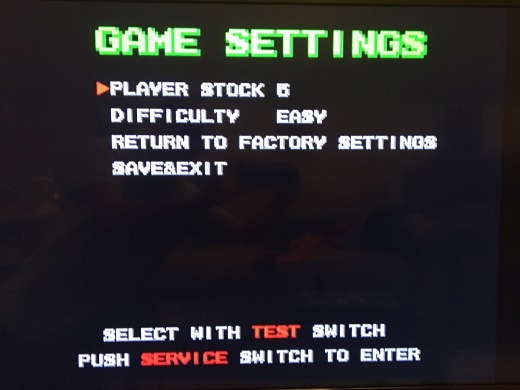 Manage the game difficulty to your own taste in the System Menu.

Options: In the System Menu, under Game Settings, you can adjust the difficulty level.  Under Easy, you definitely have a chance to One Credit Clear the game if you learn to master combat (not difficult).  You can also increase the total number of lives from 1-5.  Playing with 1 credit on 5 lives, on Easy (for now) is my favorite choice. 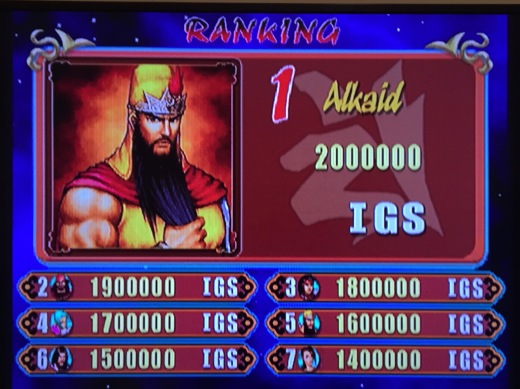 The Sammy Atomiswave will save your high scores!  At least, until you put in a new cartridge.

High Scores: If you achieve a high score, you will have the chance to save your initials on a high score screen – and each character has his or her own screen.  Now, if you lose all of your lives and continue, the score counter keeps running BUT the last two digits will reflect the fact that you had to continue to get your high score.  For example, if you simply play on 1 credit and achieve a score of 600,000 before losing your last life, that’s exactly how your score will read on the High Score screen for your character – 600,000.  However, if you used 2 credits (you chose to continue after losing your last life) and achieved a score of 1,000,000, your score on the High Score screen would read 1,000,001 to reflect the number of times you continued.  Several Neo Geo games do this as well, and I love it as a way to distinguish single-credit scores from multiple-credit scores.  Note – The high scores DO save, even if you turn the system off.  I don’t know if this happens on original non-modded systems, but when I removed the cartridge and later re-inserted it, my high scores were still saved!  However, when I put in a different Atomiswave game, ‘Backup Data Cleared’ appeared on the screen.  When I put Knights of Valour back in, all of the pre-set defaults (Japanese language, Normal difficulty, etc.) were back in place, and high scores were gone.  So basically, high scores are saved even if you turn off the system and remove the cartridge, but not if you insert another game and turn on the system.  The motherboard can only remember high scores and settings for one game at a time.

No Pausing: Remember, this is an arcade game, so there’s no pausing.  *If you press the System Menu button on the console, it will pull up, but if you exit from there, the game resets.  A timer will appear onscreen if you are in danger of not completing a stage in time.  Occasionally, however, if you need to take a quick break, you’ll find that if you stop advancing forward, no enemies will attack you, and your only danger will be the clock, which runs slowly and only actually appears when you have 10 seconds to reach the next ‘checkpoint’ onscreen. 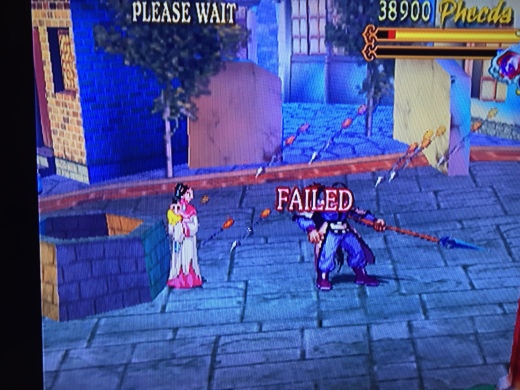 Similar to a scene in Warriors of Fate (see my review), a rather disturbing scene plays out if you don’t save this woman and her child in Phecda’s opening chapter.

The Southern Gentleman’s Letter Grade and Opinion: Knights of Valour: The Seven Spirits is an amazing Beat ‘Em Up.  The controls are a cinch, the fighting is fast and addictive, and the dialogue, while meant to be serious, is made humorous due to the translation.  Even with 8 chapters, one can blaze through the game in about 40 minutes.  The different stories associated with each character and different routes give the game excellent replay value.  I’ve not come close to fully exploring each character’s arc, but look forward to doing so. The music is great, and the graphics, which do look somewhat modern-ish compared to 1980’s and 1990’s Beat ‘Em Ups, are all excellent.  One thing I like is how the game ‘scales’ the characters – if the characters move closer to the screen, they get larger, if they push back, they get smaller – this adds a sense of depth.  I love the high score screens for each character, and trying to clear the game on 1 Credit is my personal goal.  A+